Just fifteen minutes from downtown Phoenix rests the tiny town of Litchfield Park, Arizona. At just 3.3 square miles, this little slice of desert paradise is home to roughly 5,400 residents. The downtown strip of Litchfield Park is lined with locally-owned restaurants and novelty shops. Thanks to the rapid growth of nearby communities, Litchfield Park is no longer a "tiny town in the middle of nowhere".

Most of Litchfield Park's residents come from the younger generations. The median average age is 44 for men and 37 for women. This tiny town boasts plenty of sunshine just like any other Southern Arizona desert town, offering 300 days of sunshine each year. Biking and hiking are quite popular among Litchfield residents, with plenty of desert trails to ride and mountain deserts to hike.

Residents who want to step away from the small town atmosphere for a little while can partake in all of the activities available in nearby Phoenix. The country's fifth-largest city is home to four professional sports franchises and offers an unbeatable nightlife. Downtown Phoenix offers an abundance of activities and places to visit including the Phoenix Art Museum, shopping at Heritage Square and many trade shows and concerts.

Real Estate and Other Statistics in Litchfield Park

The city and surrounding communities boast four junior high schools and nine elementary schools. The Litchfield Park Elementary School District is in charge of all students from pre-kindergarten through the eighth grade. There is a short commute for high school students to nearby Agua Fria Union High School in Avondale.

Excellent LOCATION! Located in Wigwam Creek North with the walking trails and parks, it is close to shopping, schools, dining, Luke Airforce Base, and an easy drive to We...

Amazing 5 bedroom family home in a great neighborhood featuring a grand entrance with portico that opens up to a large area perfect for outdoor entertainment. First floor...

Get ready to call this cute and charming condo home! One bedroom, one bath, new carpet throughout, large bedroom, refrigerator, washer and dryer included, Updated kitchen...

9.44 acres of Luxurious family compound set in a resort lifestyle. Have the kids build a home on site! This home backs to a magnificent view of the Whitetank mountains. I...

Beautiful BRAND NEW Home with one of the Best View Lots in the community Overlooking the White Tank Mountains! Located in a highly desirable West valley location. Featuri...

Home is new and currently under construction. You will fall in love with this marvelous condominium located in a beautiful golf course community! The light & bright inter...

Fall in love with this marvelous condominium located in a beautiful golf course community! The light & bright interior offers 2 bed, 2 bath and open commonareas with a gr...

All information should be verified by the recipient and none is guaranteed as accurate by ARMLS. Copyright 2021 Arizona Regional Multiple Listing Service, Inc. All rights reserved. 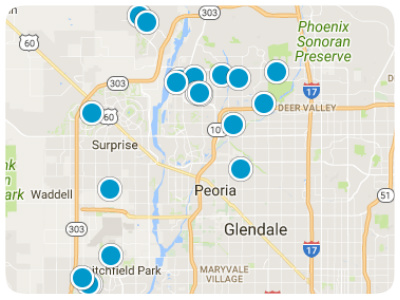